Join us now to get access to all our features. Once registered and logged in, you will be able to create topics, post replies to existing threads, give reputation to your fellow members, get your own private messenger, and so, so much more. It's also quick and totally free, so what are you waiting for?

You are using an out of date browser. It may not display this or other websites correctly.
You should upgrade or use an alternative browser.

No permission to download
Overview History
GOLD
NOTES:
• The only supported versions are 1.13-1.17. Other versions will not work!
• If you have any issues or questions, please post in the discussion tab or PM me.

Uranium
• Uranium ore can be obtained through mining. Different ores/blocks have configurable probabilities of dropping uranium ore when mined

• Uranium ore is useless until its enriched via smelting. Enriched uranium is used to make fuel rods for reactors and nuclear weapons

Nuclear Reactors
• To create a nuclear reactor, you need to place 1 reactor core, 3 cauldrons, 1 hopper, and 1 furnace in the configuration show below (note: the furnace must be placed last): 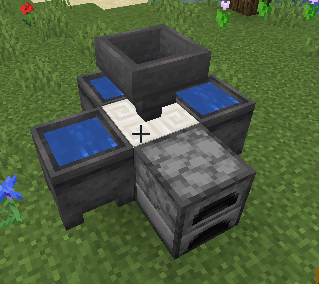 • To use the nuclear reactor, simply place fuel rods in the hopper. By default, 1 fuel rod will power the furnace for the same amount of time as a lava bucket would (1000 seconds)

• While the reactor is running it will use up the water in the cauldrons. By default, 1 cauldron level of water is used every 30 seconds. If the reactor runs out of water it will meltdown (explosion + radiation in surrounding area)

Nuclear Weapons
• There are two nuclear weapons: atomic bomb and hydrogen bomb
• Both weapons cause a large explosion on impact and radiate the surrounding area but the hydrogen bomb is more powerful
• To launch a nuclear weapon, click the item while looking in the direction you want the missile to fire and it will explode on impact
Spoiler: Gif

• The effects of radiation are configurable but by default the effects are: weakness starting at 25 rads, nausea at 50 rads, wither at 75 rads, and harm at 100 rads

If PVP is disabled in the region, then nuclear weapons will not harm players.

How to install the NuclearMC plugin?​

The #1 site for minecraft plugins & more!

We strive to provide the highest quality content, while following DMCA. If something isn't right, visit our DMCA PAGE

We get it, advertisements are annoying!

Sure, ad-blocking software does a great job at blocking ads, but it also blocks useful features of our website. For the best site experience please disable your AdBlocker.